From MVP in Bubble.io To Silicon Valley And Seed Round Funding 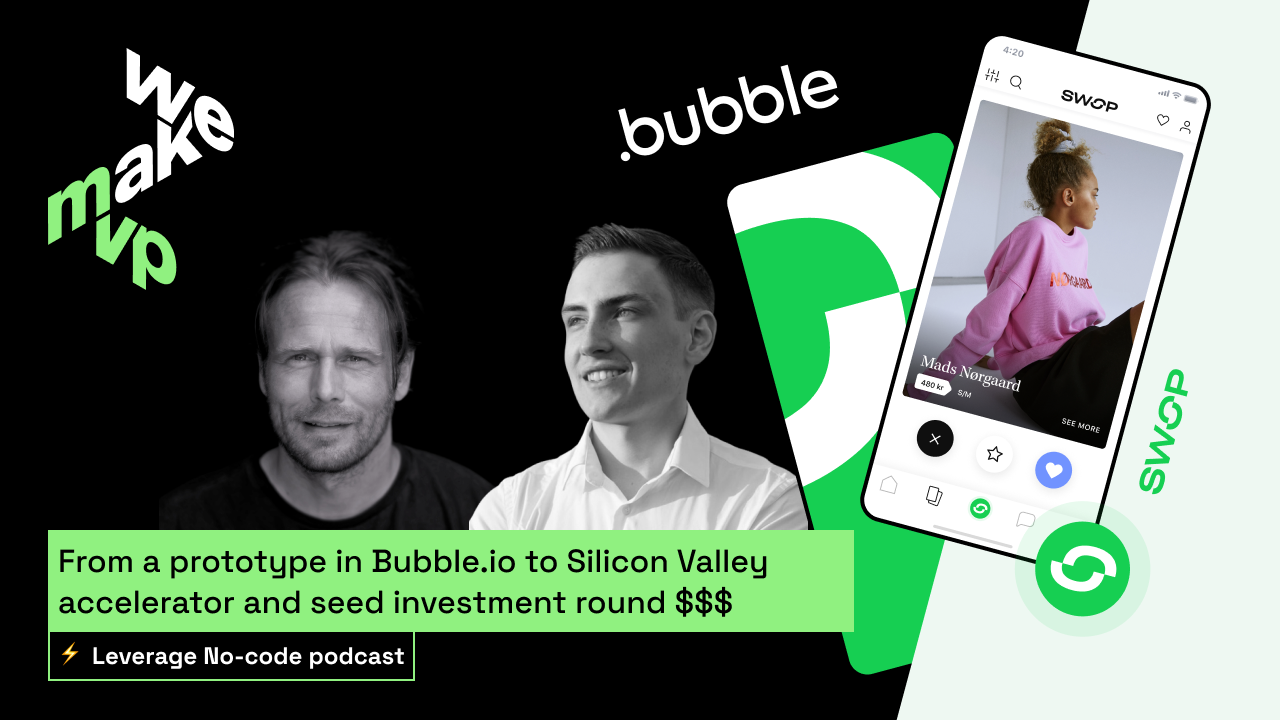 It's time to change your mind and force avoiding losing time with classical software creation approaches.

We have interviewed Lars Richter, founder of the SWOP project — a sustainable marketplace to exchange old clothing.

SWOP’s MVP app development was finished within 120 hours. SWOP managed to get early traction, get into the Silicon Valley accelerator and raise a seed round.

Explore the full story directly from Lars in our brand new podcast episode:

How Lars came up with the SWOP idea

Lars has young children who attend a school in Denmark. One day Lars noticed they were bringing bags of old clothing to exchange for desired items with their classmates.

After a while children started to repeat this activity on a weekly basis. Lars realized that things were serious when it started affecting his routine.

Since there wasn't any gen-z platform to simplify clothing exchange, Lars decided to launch one.

Luckily, a friend of Lars's told him about no-code just around the same time Lars was starting the SWOP. The friend started to learn Bubble.io and created an app for his wife to manage plant watering within 25 hours. This story blew Lars's mind away and he made a decision to give it a try. He decided to launch the first version of SWOP as a Bubble.io mobile app.

We were helping Lars with the development and used the no-code development platform Bubble.io + a mobile app wrapper BDK Native to convert the Bubble App to IOS & Android and publish it to App Store & Play Store.

It was funny and we got rejected upon Apple review 2 times 😁.

After making a few workarounds our Bubble.io IOS app finally got published.

Getting into the Silicon Valley accelerator

The SWOP team was originally based in Europe. They decided to apply to Plug and Play accelerator and got successfully accepted. But why? There are 2 reasons.

The first one is that there were a bunch of activities with the target audience in local schools. The team talked a lot with students, asked them to publish their clothing on the platform, engaged them through interactive events, etc.

This helped to improve the product ideation process and design a superior user experience.

The second factor is that the MVP delivery of SWOP took only 120 hours and it let the team pass the application deadline. With the use of no-code, it is easier to make product iterations very fast.

No doubt that Silicon Valley is a shelter to the biggest startup community where there are also many VCs and angel investors. Lars and the team were very proactive there during the acceleration program and even made a pivot towards becoming a fully digital NFT platform. As a result, SWOP raised a seed round.

Even besides this achievement, the SWOP team is continuing to pitch and is doing it constantly. For example, they are going to visit the new acceleration program in Paris in the summer of 2022.

As said SWOP modifies its concept and besides being focused only on sustainability in fashion, now is making steps towards becoming fully digital, integrating NFTs, Blockchain, and AI filters.

SWOP is now also registered in the United States and will be entering this market aggressively in the near future.

If you are interested in SWOP as a potential investment, you can visit an investors page and read more.

Using no-code is a must-have during the early stage. It lets you test your ideas and come to a reasonable concept faster, as happened in Lars's situation. If Lars didn't choose to use no-code in 2021, most likely that he would have been still working on developing the MVP until now and never got acquainted with so many people and ideas that impacted his startup.

SWOP started with just a no-code mobile app and ended up with a situation where they have a clear vision and resources to move on.

Find this story insightful? Want to achieve the same success as SWOP did? Book a call with us and we would figure out how no-code can help you bring your idea to reality.

Thank you! Stay tuned and we will reach out with new stories soon!
Oops! Something went wrong while submitting the form.
Read next:

Prev
How to Save Your Time & Money Building Custom Software For Your Business in 2022
15 Takeaways After Our Bubble.io Mobile App Was Rejected 2 Times upon Apple Review
Next

Let's figure out how your idea can be implemented with no-code
Thank you! Your submission has been received!
Oops! Something went wrong while submitting the form.